We have been collaborating with students in the classroom of Ms. Vickie Weiss, on a series of corrosion experiments to scientifically test claims made by the State of Michigan regarding lead problems in Flint drinking water. The Michigan Department of Environmental Quality has repeatedly claimed that:

In any case, science is supposed to be about TESTABLE HYPOTHESES, and experimental results should be REPRODUCIBLE by anyone. Hence, we provided experimental apparatus to Ms. Weiss’ classroom, another local high school and to Brad Wurfel at MDEQ, so that they could do the science themselves if they were interested. The elementary and high school students were very interested and did the simple testing—as of the time we wrote this article, MDEQ did not respond to our query about how their testing was going.

We shipped all three parties glass jars which had lead bearing plumbing in them, comprised of copper coupons with 50% lead solder on it  — intending to simulate the effect of water chemistry in pipes of old homes with lead solder (see Figure 1). They randomly picked sample jars that would be filled with either Flint water or Detroit water. There were 5 groups of students from City School, and each group had a jar into which they poured Flint water or Detroit water.

The students labeled and sent us tubes with water samples from their experiment to analyze on our Inductively Coupled Plasma Mass Spectrometer (ICP-MS) run by Research Scientist Dr. Jeffrey Parks.

After we receive samples from the school in the tubes (see below), the first thing we do is add 2% concentrated nitric acid (HNO3) to each sample to dissolve any particulate lead: 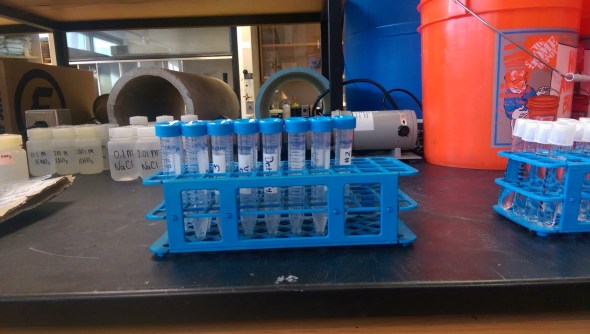 Then we transfer the samples into 13 ml tubes that can be run on an Inductively Coupled Plasma Mass Spectroscopy or ICP-MS (aka “The Beast”): 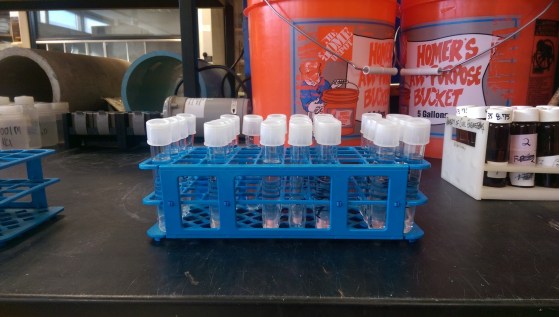 Next, we load them on to the ICP-MS’ auto-sampler, which has a moving needle to inject the sample into the machine: 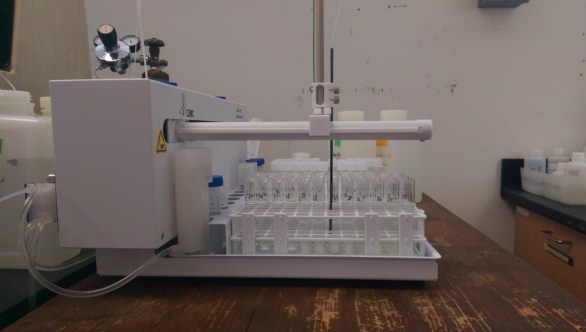 Once the water sample has been injected into the ICP-MS (see below), it passes through a nebulizer, which breaks the water constituents and vaporizes it. The vaporized sample then goes into a plasma chamber, where it is heated up to 8000-10,000 K (Kelvin). This is almost two times hotter than the surface of the sun. 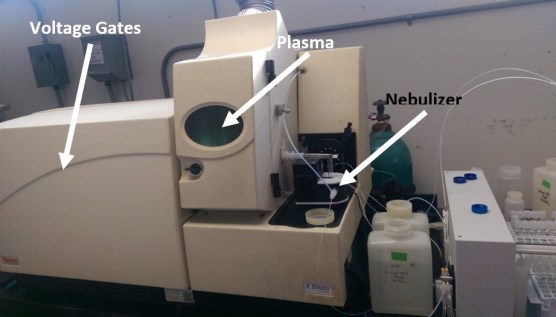 Here is a representative picture of the plasma inside an ICP-MS (courtesy of Saclay Institute of Matter and Radiation, France): Finally, the plasma goes into a series of voltage gates, which is read by the computer and the results are shown on the screen: 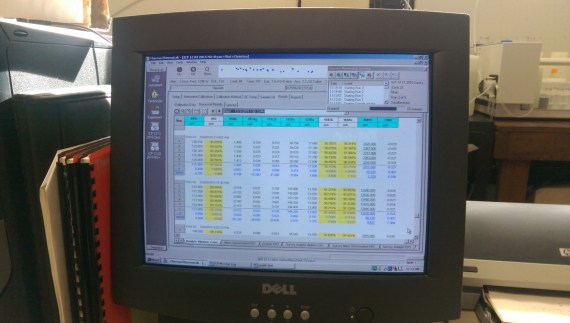 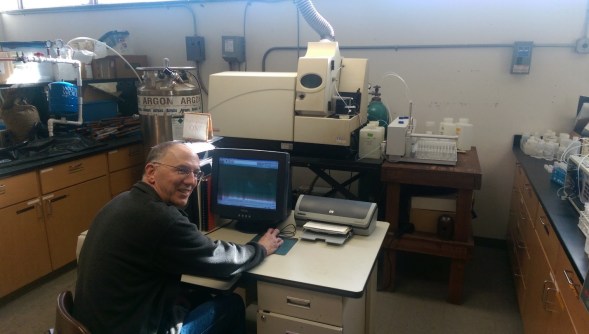 Round 1 graphs show intermediate results, and Round 2 graphs are at the end of about four weeks: 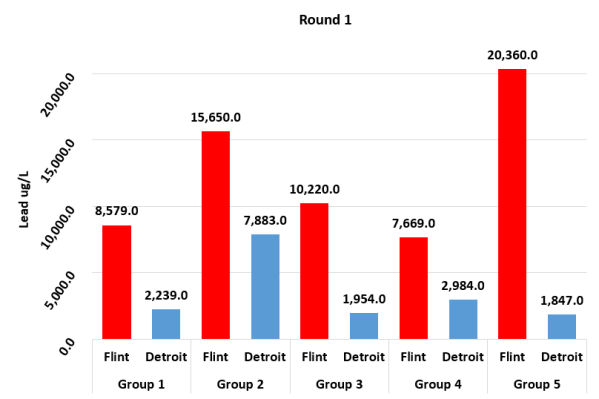 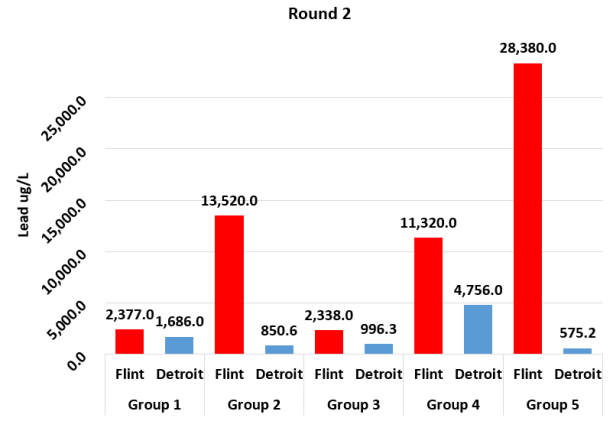 Drew Hertzberg, 10/26: “The Detroit water does not have a lot of led in the water. I am very thankful that my water comes from Detroit!” (sic)

Estella, 10/20: “There are so many white things in the flint water it looks like a snow globe!…”

Estella, 10/26: “… Detroit water there are little blue things floating around in the water and the flint water has a lot of little white things in it.”

Riya Achuri, 10/20: “Predictions: I think that the Flint water will have more led in it because it is more open to it.” (sic)

Riya Achuri, 10/26: “Detroit water: There is a lot of led in the Detroit water but not as much as there is in the Flint water.”

Carson Kuhlmann, 10/20: “Will scientists ever be able to remove the led from the Flint water?” (sic)

Alex Li, 10/26: “The Detroit still has not changed but the flint’s lead started to blend with the water” (sic)

Krisna Pedavalli, 10/23: “Flint water: The water is getting super dirty I just don’t know how people in Flint drink that water sometimes.” (sic)

Sophia, 10/20: “Both containers have some lead particles, but the Flint water has more lead. The Flint water looks bad and unhealthy to drink…”

Nicholas Stokes, 10/20: “..Questions: What is with the flint river chemistry that causes the corrosion? What does lead do in the body to make us sick?”

Nicholas Stokes, 10/26: “There is enough lead in the jar for it to be a snow globe. Now I see why people are getting sick. That is way too much lead…”

The elementary school students visual and experimental data, confirm that the Flint River water (without inhibitor) is much more corrosive to lead than Detroit water.

Experiments to test corrosivity of water are NOT complicated. MDEQ should consider such tests in the future. It would be a viable alternative to their current (ideal?) approach of changing the water source and seeing if kids’ blood lead spikes.