HomeConsidering the Unimaginable: Did McElmurry completely fabricate his story of work “IN FLINT” from 2010-2014?

Friday’s STATESIDE correctly noted that the entire case of Special Prosecutor Todd Flood against Dr. Eden Wells and Mr. Nick Lyons, is critically dependent on the veracity of his star witness — Dr. Shawn McElmurry.  When we filed our formal complaint against Dr. McElmurry on March 1, 2018, we were virtually certain that he had exaggerated his qualifications and work experience in Flint, to win “sole source” contracts for millions of dollars in research funding and leadership of FACHEP during the Federal Water Emergency. After McElmurry evaded direct questions from reporters last week, we reviewed his sworn testimony at trial, and are now forced to consider the unimaginable: What if Dr. McElmurry fabricated the entire story of his 5 year volunteer research effort “in Flint?”

Just consider a few illustrative strands of a tangled web that Dr. McElmurry wove on the witness stand, trying to answer repeated questions about what he did and when, in relation to his past work “in Flint”:

Question: “that was quite some time ago that you were actually started with boots on the ground within the city of Flint?”

McElmurry: “…my work in Flint starts probably about nine years ago now. No, that’s too many, probably like seven or eight years ago .. I got pulled in along with researchers at Purdue University, US EPA Region 5 to try to help him address what he saw as a challenge managing their infrastructure..”…“we worked for a while on the shrinking city problem if you will, and we published some of that work and I kind of took a break from Flint. I wasn’t as involved in Flint and when I started hearing the news reports kind of roll out about problems in Flint I will be honest with you, my wife got sick of me complaining about it and she told me to do something about it and so I did not know Doctor Mona Hanna-Attisha. I did not know anyone else in Flint at the time but I just emailed her and said that I have you know, data from before the crisis that might be useful to understand that and so I started to come re-involved…”

Question: “Just to get, and I understand the gravity of the work. How important was this work to you and your team?”

McElmurry: So obviously Flint was international news but more so then that. You know, we are all residents of the State and you know, I worked in Flint before and for all of us on the team…we felt that this would, you know, this was our family, our kids, I mean we felt, we really felt for the people of Flint….

Question: So Doctor McElmurry I want to take you back in time to your, you had mentioned to the Court you came here in what year specifically to start working in the city of Flint?

Question: When was that <working in Flint>?

McElmurry:  As I said, for some reason—well maybe five years earlier.  I know we had a publication that came out right as the water crisis had kind of gotten national attention, and that was probably two years prior to that we had been working in Flint.

Question: And you had been involved in counseling Mayor Walling years ago on water issues in Flint?

Question: And I was intrigued on direct examination when you mentioned that you had previously had experience in Flint dealing with the impending, as many communities have, about their municipal water systems, and and that was in 2014, correct?

McElmurry: I came to Wayne State in 2008, and the work was shortly thereafter, so it was before 2014.

Question: Let me ask you, this, in what type of work were you doing in Flint regardless of the time period?

McElmurry: So at the time Mayor Walling had,…..very broad discussion about managing utilities and infrastructure in shrinking cities.

Question:  In other words, the mayor and municipal leaders were trying to learn of the nature of the problem and possible cures, too, right….now how long?…And, for how long did that work in research go?

McElmurry: I mean, I remember I was pretty active with that for more than two years I would say.

Question: And, then, you have a memory in your mind’s eye when it ended, that work?

McElmurry:  I would have to refer to—

Question: Right. Well, let’s work with some dates we do know.  We do know that the switch to Flint River occurred in the spring of 2014, right?

Question:  So your research ended before that day?

Question: Were you aware of any of the discussion about the water switch obviously prior to April of 2014?

McElmurry: I can’t recall how much I was aware of.

Question:  So even though you had done research in Flint, as far as your academic obligations, you weren’t brought in on any, in any capacity, with respect to the water switch?

McElmurry: At the time I was doing the work on shrinking cities we never discussed switching to an alternative water source as a way to, in any of those discussions.

From the above we created a rough timeline to try and make sense of McElmurry’s research work “in Flint” using his trial testimony and NIH proposal.

The FOIA of Dr. Faust provided documents, which indicate that McElmurry joined her PhD committee and had his first contact with the City of Flint on her project on January 9, 2013. Assuming that document is correct, the only possible window for Dr. McElmurry’s work is from January 2013 to April 2014 before the switch. That is only 1.3 years even if Dr. McElmurry’s now dubious word is taken as truthful. And strangely, even if he was working “in Flint” in that time-frame and counseling Mayor Walling, McElmurry has now claimed under oath that he had NO KNOWLEDGE OF THE PENDING SWITCH TO FLINT RIVER?

Furthermore, Dr. Faust and her advisor, assert that McElmurry did none of the work “in Flint” described in her dissertation or paper. Dayne Walling, supposedly counseled by McElmurry during that critical time period 2013-2014, does not remember any such thing. Nobody has yet vouched for the fact McElmurry even stepped foot “in Flint,” much less worked there for 1.33, 4 or 5 years. “Boots on the Ground?”  We are starting to wonder if McElmurry’s sneakers ever touched a street “in Flint.” The only documentation we have that McElmurry did anything at all related to Flint, is his participation in the one January 9, 2013 phone call.

Despite the fact that some professors who gorged themselves at the FACHEP funding trough (e.g., McElmurry supporters Dr. Love, Dr. Ben Pauli and Dr. Laura Sullivan) are rallying around McElmurry even as we speak – asserting that we are “bullies” and spreading “false information” and deserving of sanctions for our supposed “unethical” behavior, we stand by our every word. And for the record, we can no longer find the WAYNE STATE PRESS RELEASE POSTED YESTERDAY WHICH DENIED OUR ALLEGATIONS. Attempting to provide an explanation for this disappearing denial, FACHEP’s Dr. Ben Pauli stated:

It sounds like the legal folks are being super careful right now given everything that’s going on. I don’t blame them. I’m glad folks got to see the statement in its original form! 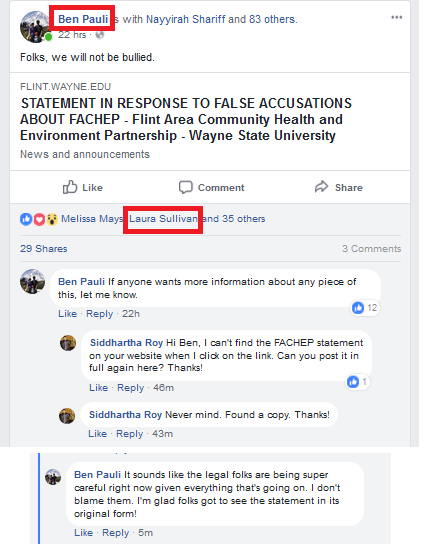 We do not blame them either. We repost the original Wayne State University press release (now deleted) for all interested readers and historians.

If our new concerns prove justified, McElmurry may be guilty of perpetrating, one of the most insidious cases of scientific misconduct ever, in relation to procurement of disaster relief research funding.

6 thoughts on “Considering the Unimaginable: Did McElmurry completely fabricate his story of work “IN FLINT” from 2010-2014?”