BACKGROUND
Engineers shall hold paramount the safety, health, and welfare of the public  – The First Canon of Civil Engineering

Flintwaterstudy was launched as a long distance scientific relief effort on August 4, 2015, after MDEQ employees bragged to Flint’s citizens that EPA’s knowledge of their illegal activities had been “handled.” With EPA’s Miguel Del Toral out of the way, all hope that Federal and State agencies would help Flint residents was gone. We called for volunteers and a team of 25 (4 undergraduates, 11 graduate students, 7 post-docs and 3 faculty) answered the bell.  Each of us felt morally obligated to assist in conducting an unprecedented independent sampling of Flint water.

We provided the scientific expertise, labor and funding, that allowed Flint residents to help themselves. Wateryoufighting4, ACLU-Michigan and others stepped up to do the difficult work of actually coordinating and collecting the critical samples.  They did so and demonstrated that their water was unsafe by any reasonable standard.

Their victory (if you can call it that), to gain access to safe water and the protection of federal laws that the rest of us take for granted, was hard fought and against long odds. One insider did tell us: “In a million years, they <MDEQ> never imagined you would do what you did.”

What we did, was to give the truth and Flint residents a fighting chance. Since last August many people have contacted us, and asked how they could help us. To date, we refused almost all offers of financial support to avoid even an appearance of a conflict of interest—even so, our integrity and motives were openly questioned on more than one occasion. We have tried very hard to be apolitical and fair. What happened in Flint represents a tragic failure of both state and federal government.

We now feel that Flint’s kids are finally on their way to being protected and decisive actions are underway to ameliorate the harm that was done. We were fully prepared to remain engaged for another 10 year battle as in the case of the DC lead crisis , but our major efforts in Flint are now clearly behind us. While we would not wish the last 6 months on anyone, we would not trade it for anything either.

FUNDRAISING
For those interested in what it took, financially and time-wise, the following is a rough accounting: 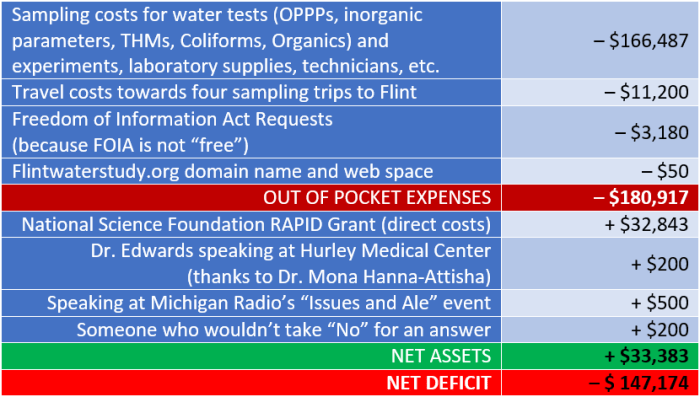 The deficit of $147,174 in out of pocket expenses has been covered by Professor Edwards’ discretionary research and personal funds. We also conservatively estimate that our total donated labor exceeds 3.0 person years (well over $165,000) of effort.

No matter what, our overall balance sheet will be closed out as “priceless,” because as environmental engineers we aspire to “ Saving <Human>kind from Itself,” and we defended the truth and Flint residents with sound science . We are also ashamed that some in our profession acted contrary to the First Canon of Civil Engineering, and violated the “safety, health and welfare of the public.” Hopefully, our work will inspire current and future ‘Environmental Engineers’ to also uphold the First Canon of Civil Engineering. People have also asked us what our similar 10+ year volunteer effort in D.C. cost . We would tell you, but you would never believe it, and that battle is still not over.

At this point, we hope our work speaks for itself.  If you like what we did, and want to donate to partly offset our costs and help us do similar work in the future, we have set up this GoFundMe page:

Alternatively, you can also donate directly to Virginia Tech here. Under “Gift Amount and Designation,” enter your amount and “Restricted Account 871433-Edwards” and continue.

All proceeds will ultimately go to a Virginia Tech Foundation account supervised by Dr. Marc Edwards, offsetting costs for our work in Flint, and to support similar future work in the public interest.